The Third Reich: A Chronicle 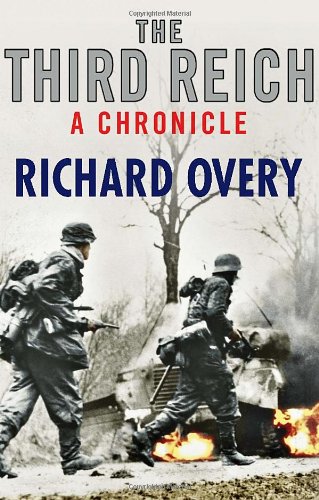 The Third Reich was the name Hitler and the Nazi Party gave to the dictatorship that began in 1933 and ended twelve years later with the utter destruction of Germany and Hitler's suicide. Defined by the messianic, iconic figure of the Führer, the Third Reich was one of the pivotal periods of the modern age. From small beginnings in the 1920s, Hitler's movement came to dominate German society in the 1930s, bringing with it the militarization of German society, the apparatus of state terror and a policy of violent discrimination against political opponents, the so-called 'asocials': gypsies, homosexuals, and, above all, the Jews. The history of the Reich is bound up with territorial aggression, total war and genocide. The end result was the complete defeat of Germany and the annihilation of millions of Europeans, a historical drama without precedent that still lies as a shadow over modern-day Germany. Richard Overy charts the rise and fall of Nazi power in a compelling narrative of the period, amplified by extensive quotations from documents, letters, diaries and oral testimony, and accompanied by many original and striking images of the era. There are also fact boxes which explore many of the important aspects of the Third Reich in greater detail. Authoritative, informative and sumptuously illustrated, written by a scholar steeped in knowledge of the period, The Third Reich brings the bloody realities of war, conquest and genocide vividly to life. It is an ideal book for anyone fascinated by the stormy history of the twentieth century, World War II and the age of dictators.