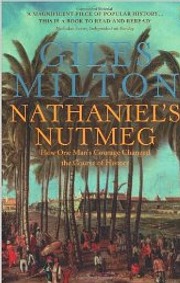 Consider the humble jar of nutmeg pushed to the back of your kitchen cupboard, among all the other spices that you hardly ever use. Would you believe that nutmeg formed the basis for one of the most bitter international conflicts of the 17th century, and was also intimately connected to the rise to global pre-eminence of New York City? Strange but true; nutmeg was one of the most prized commodities in Renaissance Europe, and its fascinating story is told in Giles Milton's delightful book Nathaniel's Nutmeg.

The book deals with the competition between England and Holland for possession of the spice- producing islands of South-East Asia throughout the 17th century. Packed with stories of heroism, ambition, ruthlessness, treachery, murder, torture and madness, Nathaniel's Nutmeg offers a compelling story of European rivalry in the Tropics, thousands of miles from home, and the mutual incomprehensibility which often comically characterised relations between the Europeans and the local inhabitants of the prized islands.

At the centre of the story lies Nathaniel Courthope, a trusty lieutenant of the East India Company, who took and held the tiny nutmeg-producing island of Run in the face of overwhelming Dutch opposition for more than five years, before being treacherously murdered in 1620. Courthope's heroism led to the English taking the Dutch colony of Manhattan in revenge for the death of Courthope and the loss of Run. The subsequent peace deal between the two nations gave Holland Run and the British Manhattan; New York was born. As Milton wittily remarks, although Courthope's death "robbed England of her nutmeg, it gave her the biggest of apples".