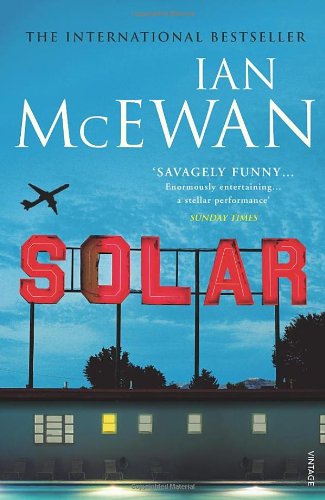 Michael Beard is a Nobel prize-winning physicist whose best work is behind him. Trading on his reputation, he speaks for enormous fees, lends his name to the letterheads of renowned scientific institutions and half-heartedly heads a government-backed initiative tackling global warming. A compulsive womaniser, Beard finds his fifth marriage floundering. But this time it is different: she is having the affair, and he is still in love with her. When Beard's professional and personal worlds collide in a freak accident, an opportunity presents itself for Beard to extricate himself from his marital mess, reinvigorate his career and save the world from environmental disaster. Ranging from the Arctic Circle to the deserts of New Mexico, "Solar" is a serious and darkly satirical novel, showing human frailty struggling with the most pressing and complex problem of our time. A story of one man's greed and self-deception, it is a profound and stylish new work from one of the world's great writers.

`a novel that promises comedy as well as crisis' --The Guardian

`McEwan has already aired extracts ... and the warmth, humour and zest of the book were unmistakable'
--Sunday Times

"Sizzling lucidity distinguishes this enormously entertaining novel... poised between the heart-warming and heart-stopping... scarcely a page fails to dazzle." -- The Sunday Times

"... in Solar, [McEwan] shows... a puckishness, a broadness of humour, an extravagance of style - that we haven't seen before."
-- Spectator

"From an early stage, [McEwan's] sumptuously textured language rested on a flair for finely engineered design." --The Independent

"McEwan is in many ways the closest thing we have to a national novelist... [Solar] will come to be regarded as a classic." --Daily Telegraph

"Vivacious and sprawling, a beautifully and compellingly written novel...McEwan's achievement is the brilliant creation of a flawed, larger than life character who all but walks off the page to shake your hand." --The Times

"This is an absorbing, accomplished, instructive, and very funny novel bye one of fiction's most fecund minds." --Country Life

"McEwan excels at climate science but his protagonist makes you shudder . . . he's green and he should be read." -- The Observer

"an ambivalent, comic picaresque of cunning and subtle wisdom ... McEwan's established readers will enjoy it, as will everyone else, not only for the humour but for many moments of eerie truth" --Irish Times

"...the overarching plot pulls off a clinching novelistic coup, using comedy to sneak grimmer matters past the reader's defences." --The Guardian Review