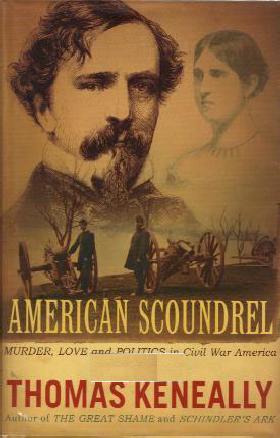 The husband: charming cad and powerful Congressman, with hopes of becoming the next President The wife: beautiful society hostess, 20 years old, of Italian descent
The lover: the most handsome widower in Washington. This is the starting point of American Scoundrel, a true story every bit as colourful as a novel. The shooting and trial are described with all Thomas Keneally's powers of dash and drama, against a backdrop of double-dealing, intrigue and 'the slavery question'. Having - through his political connections - got away literally with murder, Sickles rehabilitated himself by founding the Excelsior Brigade and fighting in the Civil War. He became a General, and at Gettysburg ( 9,000 men from his corps were killed when he led them out of position) lost a leg, which he put into the Military Museum in Washington where he would take friends to visit it. His young wife, meanwhile, was ostracised - a victim of a 19th-century morality cruelly condemning of women, while turning a blind eye to men's sexual adventures with mistresses and prostitutes.