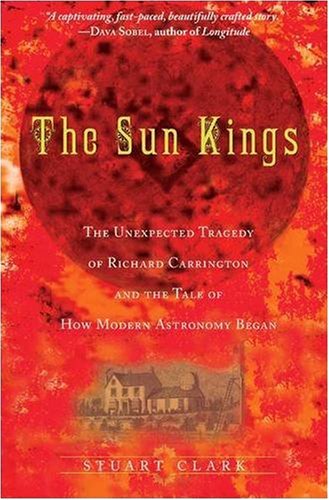 In September of 1859, the entire Earth was engulfed in a gigantic cloud of seething gas, and a blood-red aurora erupted across the planet from the poles to the tropics. Around the world, telegraph systems crashed, machines burst into flames, and electric shocks rendered operators unconscious. Compasses and other sensitive instruments reeled as if struck by a massive magnetic fist. For the first time, people began to suspect that the Earth was not isolated from the rest of the universe. However, nobody knew what could have released such strange forces upon the Earth--nobody, that is, except the amateur English astronomer Richard Carrington.

In this riveting account, Stuart Clark tells for the first time the full story behind Carrington's observations of a mysterious explosion on the surface of the Sun and how his brilliant insight--that the Sun's magnetism directly influences the Earth--helped to usher in the modern era of astronomy. Clark vividly brings to life the scientists who roundly rejected the significance of Carrington's discovery of solar flares, as well as those who took up his struggle to prove the notion that the Earth could be touched by influences from space. Clark also reveals new details about the sordid scandal that destroyed Carrington's reputation and led him from the highest echelons of science to the very lowest reaches of love, villainy, and revenge.

THE SUN KINGS transports us back to Victorian England, into the very heart of the great nineteenth-century scientific controversy about the Sun's hidden influence over our planet.

"The techniques of Carrington and his contemporaries gave birth to the new science of astrophysics, which can probe questions about the structure, function, and origin of the stars, planets, and the universe at large. . . . From Carrington's observations, Clark spins a lively account of seminal discoveries in spectroscopy, photography, and theoretical physics that led to the present-day understanding." - Laurence A. Marschall, Natural History