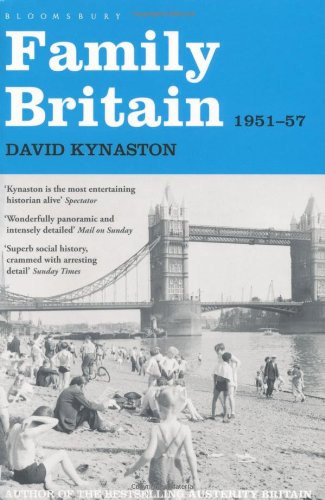 As in Austerity Britain, an astonishing array of vivid, intimate and unselfconscious voices drive the narrative. The keen-eyed Nella Last shops assiduously at Barrow Market as austerity and rationing gradually give way to relative abundance; housewife Judy Haines, relishing the detail of suburban life, brings up her children in Chingford; the self-absorbed civil servant Henry St John perfects the art of grumbling. These and many other voices give a rich, unsentimental picture of everyday life in the 1950s. We also encounter well-known figures on the way, such as Doris Lessing (joining and later leaving the Communist Party), John Arlott (sticking up on Any Questions? for the rights of homosexuals) and Tiger's Roy of the Rovers (making his goal-scoring debut for Melchester). All this is part of a colourful, unfolding tapestry, in which the great national events - the Tories returning to power, the death of George VI, the Coronation of Queen Elizabeth, the Suez Crisis - jostle alongside everything that gave Britain in the 1950s its distinctive flavour: Butlin's holiday camps, Kenwood food mixers, Hancock's Half-Hour, Ekco television sets, Davy Crockett, skiffle and teddy boys. Deeply researched, David Kynaston's Family Britain offers an unrivalled take on a largely cohesive, ordered, still very hierarchical society gratefully starting to move away from the painful hardships of the 1940s towards domestic ease and affluence.
"I could quote forever from this magnificent book. Professor Kynaston is the most entertaining historian alive, and his Tales of a New Jerusalem, when concluded, will undoubtedly be the first stop for any reader interested in the vitality, rather than the general contours, of this long period." - The Spectator

"Kynaston's book is a deeply textured tapestry of everyday life the day before yesterday, a collage of diaries and memoirs every bit as rich and rewarding as a great Victorian novel... Kynaston is a master of these kinds of stories, funny and touching by turns... Plenty of historians have written about it before. But none have captured it better or with more human sympathy than David Kynaston, in this deeply researched, richly detailed and very moving book." - The Telegraph

"David Kynaston selects his words with the precise and evocative care of a Metaphysical poet exploring a new-found land... It is the great strength of Kynaston's almost Shakespearian approach to social history -- a vast canvas, huge detail, imaginative empathy and wise authorial neutrality -- that he allows one half of his readers to wallow comfortably in nostalgia while the other half shudders with relief that the 1950s are half a century behind us... On almost every page there is an arresting detail, statistic or quotation." - The Sunday Times

"A history not of grand designs and sweeping brush-strokes but of delving and patient probing. And what riches it nets.  A narrative shot through with sharp insights and thoughtful reflections.  History of a high order." - The Financial Times

"This new instalment is every bit as multidimensional and fascinating as the first." - The Daily Express

"Kynaston is excellent." - The Independent

"Sweeping... brilliant... hugely compelling, bustling with a generosity of spirit. The pages fly past." - The Observer