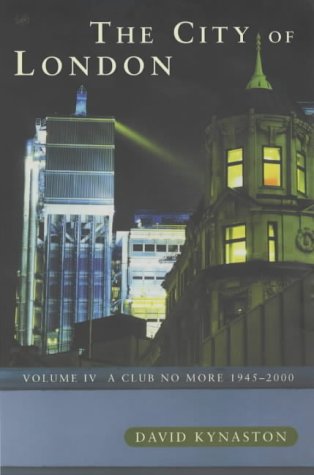 The City of London. Vol IV: A Club No More is the fourth and final volume of David Kynaston's epic history of the square mile in the modern era. This lively and informative book takes the story from the post-war era, when the City was hemmed in by bombsites and austere Chancellors, through to very recent developments, such as the "Big-Bang" deregulation of 1986. This is as much a social history as a financial study, with interesting discussions of the changing class and complexion of the City, and with fascinating details on the early computerisation of the big companies. As with earlier volumes Kynaston's style is that of an anecdotal storyteller. Colourful characters, dramatic boardroom struggles and heated exchanges between politicians and bankers dominate the pages.