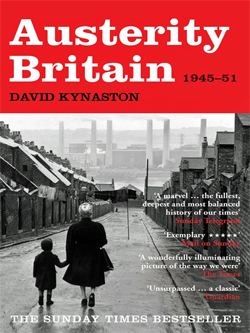 AUSTERITY BRITAIN launches the groundbreaking series Tales of a New Jerusalem, which will tell the story of Britain from VE Day in 1945 to the election of Margaret Thatcher in 1979 as never before.

Coursing through AUSTERITY BRITAIN is an astonishing variety of contemporary voices: from Judy Haines, a plucky Chingford housewife, to Henry St John, a pernickety civil servant in Bristol, to more familiar figures such as John Arlott (here making his first radio broadcast, still in police uniform), Glenda Jackson (taking the 11+) and Doris Lessing (newly arrived from Africa, struck by the levelling poverty of postwar Britain) — all vivid, unselfconscious, and unaware of what the future holds.

Into this story David Kynaston deftly weaves a critical, sophisticated narrative of how the victorious 1945 Labour government shaped the political, economic and even social landscape for the next three decades. Deeply researched, often amusing and always intensely readable, the first volume of David Kynaston’s ambitious history offers an entirely fresh perspective on Britain during six momentous years.

'A wonderfully illuminating picture of the way we were' - Roy Hattersley, The Times

'Almost implausibly entertaining ... The fascination of this marvellous chronicle lies in Kynaston's marshalling of individual voices to supplement the account of larger phenomena ... he is wonderfully ready to include the individual touch ... Kynaston's rivetingly enjoyable book has a quality of glorious abundance and plenty' - Philip Hensher, Spectator

'As social history, AUSTERITY BRITAIN brings off the very difficult trick of combining chronological flow and themed discussion into a seamless narrative ... it mingles shelf-loads of carefully synthesised research with first-hand testimony, from the great and good to Mass Observation diarists. His gaze is commendably wide ... Not the least of Kynaston's achievements in this extraordinary book is to demonstrate the absolute futility of blaming postwar British society - born out of ration books, shortages and bureaucratic fixers - for its materialism' - D.J. Taylor, Independent

''Welcome', 'intelligent', 'touching', 'welfare' - now there's a quartet of words you are unlikely to find in the British Midland Handbook of Charm. The above quote comes from a marvellous new book called AUSTERITY BRITAIN... Reading it, I found myself increasingly unable to answer a simple question about life in this country: why are we less human and less kind when prosperous than we managed to be when we were poor? No washing machines, no Starbucks, no computers, no television - but people evidently knew how to listen in a spirit of fairness' - Andrew O'Hagan, Telegraph