I Have a Bream 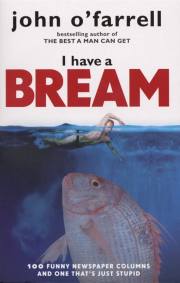 Here at last is the third collection of John O'Farrell's immensely popular Guardian columns - the final part of the trilogy in which he discovers that Margaret Thatcher is actually his mother. Contained within these covers are a hundred funny, satirical essays on subjects as diverse as Man's ascent from the apes and the re-election of George W. Bush.Plus there is a full account of O'Farrell's heroic but slightly less successful attempt to capture his Tory home town for socialism.He claims that identity fraud has got so bad that an audacious impostor using the name A.L. Blair even managed to get himself a Labour Party card by posing a left-wing champion of wealth distribution and civil rights.He asks why a Blackberry isn't compatible with an Apple. And find out why the Queen didn't go to her own son's wedding; 'What happened to that other girl you were seeing?' 'Mother, we got divorced and then she died in a car crash, remember?' 'Well sometimes you have to work at these things dear...'