I Blame the Scapegoats 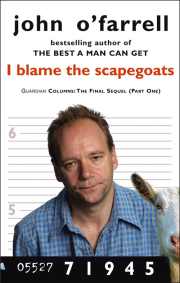 A doctor in America has just invented a 'sperm sorting machine'. At least that's what he claimed when his receptionist burst into the office to find him doing something peculiar with the Hoover attachment. Apparently the system used for separating the male and female sperm is remarkably simple. A sample is placed in the petri dish with a microscopic pile of household items on a tiny staircase. All the sperm that go straight past without picking anything up are obviously boys.

John O'Farrell's first collection of columns Global Village Idiot was a huge success prompting fulsome praise from such major public figures as the Queen Mother, Roy Jenkins and Cardinal Hume. Sadly, since their deaths, their glowing endorsements cannot be officially verified. So here instead is another collection of funny, satirical essays on a hundred and one 21st century subjects. Read how the government plans to introduce 'Santa loans' that will leave school children