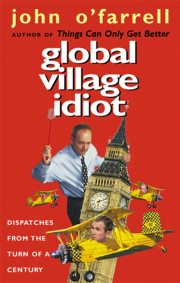 'This week the first pet passports came into effect. Around the country dogs have been hopping into photo booths and trying to look as relaxed as possible, which is not easy when you know you're not allowed on the chair.'

Gathered here are the best of John O'Farrell's newspaper columns for the Guardian and the Independent which saw him win the coveted Best Columnist of the Year Award at the prestigious British Liars Awards. Among many other things, he claims that the only conviction in the Tory Party will be when Jeffrey Archer gets sent to prison; that scientists have created a genetically superior monkey which will advertise lapsang souchong instead of PG Tips; and that with the election of George W. Bush, the global village has finally got its own global village idiot.