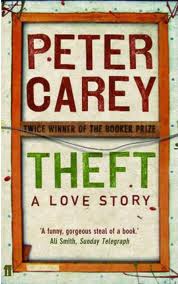 Narrated by the twin voices of the artist Butcher Bones, and his 'damaged two-hundred-and-twenty-pound brother' Hugh, "Theft: A Love Story" once again displays Peter Carey's extraordinary flair for language. Ranging from the rural wilds of Australia to Manhattan via Tokyo, it is a brilliant and moving exploration of art, fraud, responsibility and redemption.

'The best novel I've read all year . . . A stinging satire on the seedy intrigues, craven manoeuvrings and greedy machinations of the art world' - The Evening Standard

‘I grabbed this for its mad adventure but came away with a gift for the heart.’ DBC Pierre

‘Brown's novel captures the sun-soaked sexiness of the city . . .  and the hazy drug that is desire better than anything I have read in years.’  The Guardian

‘A scintillating, intelligent and uproariously funny trip into the excesses of storytelling’ Big Issue

‘Smart, zingy and extremely funny, this is a real treat.’ Paul Murray

‘It’s warmth and tenderness are hard to resist.’ Catherine O’Flynn