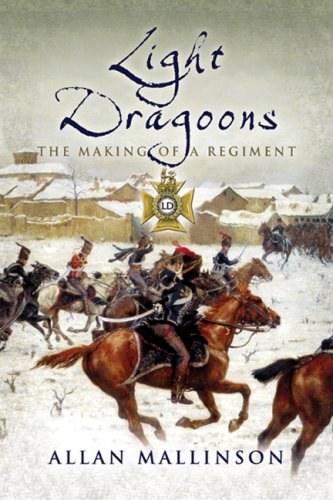 Although only formed in December 1992, The Light Dragoons look back to a history that began in the days of the first Jacobite rebellion.

The 1922 reduction in the Army saw the amalgamation of four regiments of Hussars into the 13th/18th Hussars and the 15th/19th Hussars. Now they too have been amalgamated.Allan Mallinson, a former commanding officer of the 13th/18th Hussars, follows with clarity and dexterity the fortunes of The Light Dragoons’ predecessors and describes the activities of the new regiment up to the minute. It reflects much of the last two hundred and seventy years of British history. No campaign of significance has been fought in that time without the participation of one or more of the Regiments.They gained fresh honors in both World Wars and, since 1945, have been fully involved in Britain’s withdrawal from Empire, the confrontation of the Cold War and UN’s peacekeeping. The new Postscript gives the reader a classic account of what wars in Bosnia and Iraq have involved for the Regiment and the men who serve in it.