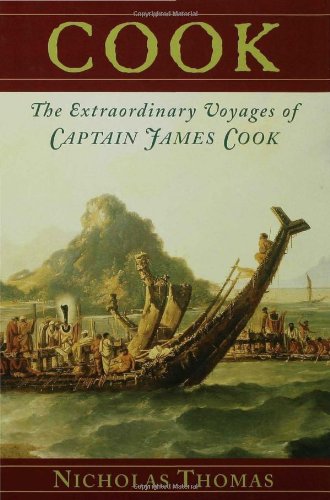 Commonly regarded as the greatest sea explorer of all time, James Cook made his three world-changing voyages during the 1770s, at a time when ships were routinely lost around the English coast. He made history by making geography-- sailing through previously unknown southern seas, charting the eastern Australian coast and circumnavigating New Zealand, putting many Pacific islands on the map, and exploring both the Arctic and Antarctic. His men suffered near shipwreck, were ravaged by tropical diseases, and survived frozen oceans; his lieutenants-- including George Vancouver and William Bligh-- became celebrated captains in their own right. Exploits among native peoples combined to make Cook a celebrity and a legend.

Cook is not, however, viewed by all as a heroic figure. Some Hawaiians demonize him as a syphilitic rascist who had a catastrophic effect on local health. Indigenous Australians often see him as the violent dispossessor of their lands. Nicholas Thomas explores Cook's contradictory character as never before, by reconstructing the many sides of encounters that were curious and unusual for Europeans and natives alike. The result of twenty years' research, Thomas's magnificently rich portrait overturns the familiar images of Cook and reveals the fascinating and far more ambiguous figure beneath.