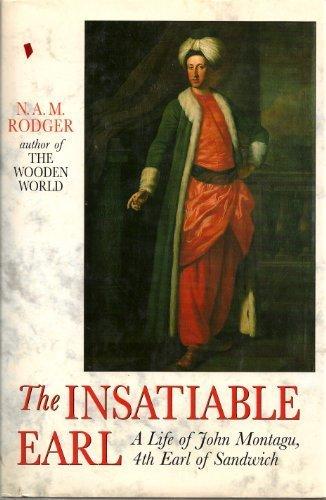 No historical figure of eighteenth-century England has been more grossly misrepresented than the inventor of our favorite fast food. The stereotype is well known: an unscrupulous man of pleasure whose mistress, a courtesan, was murdered on the steps of the Admiralty, inside which her lover was carelessly mismanaging the War of American Independence.

It is refreshing to read a biography that explodes this long-accepted view. Martha Ray was not a courtesan but rather the Joan Sutherland of her day, whose rendering of "I know that my Redeemer liveth" was admired by the most discriminating critics. It was, appropriately, outside Covent Garden after attending a performance (not outside the Admiralty) that she was murdered by an unhinged admirer; she had lived for many years with and had borne children to John, fourth Earl of Sandwich. As to his mismanagement of naval affairs, Nicholas Rodger, the outstanding historian of the eighteenth-century navy, demonstrates in this brilliant and extremely readable book that as First Lord of the Admiralty he was in a class by himself.

This was by no means his only distinction. As a diplomat he displayed extraordinary powers and won from foreign statesmen the admiration and trust that his own countrymen then and subsequently have largely denied him. As a parliamentary manager of the constituencies that he was in a position to influence, he shared an energy, skill and wonderful tact in handling all sorts and conditions of men - qualities that were acknowledged and praised by his most unrelenting denigrators. As a young man he had been an adventurous traveler with a title to a place in the history of Greek epigraphy. His lifelong passion for music, especially in championing and reviving the then-unfashionable oratorios of Handel, has given him, in the present biographer's opinion, his nearest connection to the life of our own time.