TELL ME HOW IT ENDS: An Essay In Forty Questions 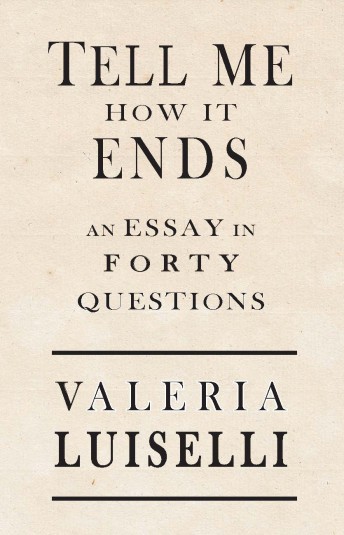 Structured around the forty questions Luiselli translates and asks undocumented Latin American children facing deportation, Tell Me How It Ends (an expansion of her 2016 Freeman’s essay of the same name) humanizes these young migrants and highlights the contradiction between the idea of America as a fiction for immigrants and the reality of racism and fear—both here and back home.

“This is a vital document for understanding the crisis that immigrants to the U.S. are facing, and a call to action for those who find this situation appalling.”—Publisher’s Weekly

“Luiselli effectively humanizes the plights of those who have been demonized or who have been reduced to faceless numbers… A powerful call to action and to empathy.”—Kirkus

“These days, the whole world, including our politics, is being shaped by migration. Few people explore the nuances of this reality more skillfully than Valeria Luiselli, a strikingly gifted 33-year-old Mexican writer who knows the migratory experience first-hand… Luiselli takes us inside the grand dream of migration, offering the valuable reminder that exceedingly few immigrants abandon their past and brave death to come to America for dark or nasty reasons. They come as an expression of hope.” —NPR

“With anger and lucidity, Luiselli depicts the nightmares these children are forced to flee in Guatemala, El Salvador and Honduras, as well as the destructive ignorance and bigotry that awaits them in America… With a beguiling mixture of compassion and intellectual rigor, she gives her readers the chance to look.”—Chicago Tribune

“Valeria Luiselli’s latest book, Tell Me How It Ends: An Essay in 40 Questions, is unsparing in its portrayal of vulnerability and determination.” —Rolling Stone

“Tell Me How It Ends is a remarkable little work that, through its narrow lens, says more about the country than books ten times its size.”—GQ

“Translating language, experience, bodies across space and time, thought and culture—Luiselli wants us to join in this work. Tell Me How It Ends calls for a wholesale reimagining of both the forces that have shaped contemporary immigration into the United States as well as the way many Americans, disconnected from fact, picture it. It calls, moreover, for action.” —Brooklyn Magazine

“…[Tell Me How It Ends] is written from a transnational perspective, and all the more lucid for it.” —The Intercept

“Tell Me How it Ends is the kind of reading experience that rips your heart out… Luiselli has already demonstrated she’s one of the most powerful young voices in fiction, and with this book she has done the same in the realm of nonfiction. Simply put, this is required reading.”—Vol. 1 Brooklyn

“…Tell Me How It Ends itself is also a sharp, useful narrative, a ‘telling better.’ It can be pressed into hands, recommended, and it will open wallets and drive people into the streets to protest.” —Remezcla

“This essential book humanizes these young migrants, highlights the contradictions of the American Dream, and explores the fear and racism so prevalent for the people who try to make the US their home.” —Literary Hub

“This book serves as another wake up call, and, even more importantly, a call to action… It’s another step forward in the strange struggle of our modern age, or maybe it’s any age, the humanizing of humans. The very least we can all do is hear these stories. Read this book.”—Proximity Magazine

“Luiselli’s book… becomes worthy of inclusion in a great American (and international) canon of writing about migration.”—Texas Observer

“Luiselli’s prose is always lush and astute, but this long essay, which borrows its framework from questions on the cold, bureaucratic work sheets with which she became so familiar (for example, “Did anything happen on your trip to the U.S. that scared or hurt you?”), is teeming with urgency… In this slim volume about the spectacular failure of the American Dream, she tells the stories of the unnamed children she’s encountered and their fears and desires, as well as her own family’s immigration story.” —Vulture

"Tell Me How It End is a book that turns numbers back into people.”—In Order of Importance

“Thorough, vulnerable, and compassionate, Tell Me How It Ends offers deep inspection on what may be perceived as a ‘long-resolved issue.’ Luiselli writes to keep our eyes open.” —Ploughshares

“It is time for the rest of us to ask our own set of questions about what we expect from our government when it comes to protecting the welfare of vulnerable children. With the help of Tell Me How It Ends, we have more insight than ever into what those questions should be.”—Signature

“Books like Tell Me How It Ends are like dew on a spiderweb, revealing the often forgotten and sometimes ignored threads of humanity that connect us all.”—Josh Cook, Porter Square Books

“In the warrens of New York City’s federal immigration court, an adolescent boy from Honduras confronts a thoroughly confused immigration bureaucracy with the help of his translator, who is the author of this book. He is just one of thousands of immigrant children longing for permanence in this country, but we get to see him up close. With Valeria Luiselli as our guide, we navigate the corridors of a system that tries and fails to reconcile America’s long-standing welcome of the poor, the terrorized, and the adventurous with its current fear and mistrust of immigrants. In the frightening year of 2017 this is a most necessary book, and a unique one, from a writer whose clear-eyed intelligence and marvelous literary imagination make every one of her narratives a compelling read.”—Alma Guillermoprieto

“Compelling and urgent, Tell Me How It Ends gives a face and a name to the hundreds of thousands who have committed the innocent crime of geography: being born in a certain time and place. The bureaucratic labyrinth of immigration, the dangers of searching for a better life, all of this and more is contained in this brief and profound work. Tell Me How It Ends is not just relevant, it’s essential.”—Mark Haber, Brazos Bookstore

“In the hours Valeria Luiselli spends at the immigration courts in NYC, her duty is to listen to children tell her stories about their scars and how they got them. Like a morbid game show, the children’s answers determine their fate. The grand prize? Permanent citizenship, if all goes well. The alternative? Deportation. Bonus: due to the volume of cases, the standard intake form forgives only those who have the most gruesome traumas, wounds that they can show—and of course, the language to speak about them. Part treatise, part memoir, part call-to-action, Tell Me How It Ends inspires not through a stiff stance of authority, but with the curiosity and humility Luiselli has long since established. It may not cure your panic, but it sure as hell won’t feed it.”—Annalia Luna, Brazos Bookstore

“Valeria Luiselli’s Tell Me How It Ends is an important reminder that words matter. The questions we ask of others are built upon a foundation of assumptions about the past and expectations for the future. Appealing to the language of the United States’ fraught immigration policy, Luiselli exposes the cracks in this foundation. Herself an immigrant, she highlights the human cost of its brokenness, as well as the hope that it (rather than walls) might be rebuilt.”—Brad Johnson, Diesel Bookstore

“With gifted prose and a compassionate but penetrating gaze, Luiselli personalizes the ongoing plight of Latin American child migrants in the United States. Her own immersion as a translator informs a trenchant first-hand account of the labyrinthine legal processes and inevitable bureaucratic indifference faced by undocumented youth. Humane yet often horrifying, Tell Me How It Ends offers a compelling, intimate look at a continuing crisis—and its ongoing cost in an age of increasing urgency.”—Jeremy Garber, Powell’s Books

“Valeria Luiselli’s extended essay on her volunteer work translating for child immigrants confronts with compassion and honesty the problem of the North American refugee crisis. It’s a rare thing: a book everyone should read.”—Stephen Sparks, Point Reyes Books

“‘Tell me how it ends,’ the young daughter says to the mother. Valeria Luiselli uses this query, said of the heartbreaking, infuriating situation involving ‘undocumented’ Central American children and the legal system they encounter here that she movingly chronicles in this powerful essay. She helps call to question where we as people, as a people, are with innocent children, who or what is ‘alien,’ even the business of who is American, given that she casts this as a connective scenario, with what happens in Tegucigalpa being related to what happens in Hempstead, New York. In this we are all Americans, finally. Imagine being put into court systems without the language to speak, much less the adult language of law. And while this essay is brilliant for exactly what it depicts, it helps open larger questions, which we’re ever more on the precipice of now, of where all of this will go, how all of this might end. Is this a story, or is this beyond a story? Valeria Luiselli is one of those brave and eloquent enough to help us see.”—Rick Simonson, Elliott Bay Book Company

“Valeria Luiselli’s Tell Me How It Ends helped me see the crisis undocumented immigrants, especially children coming from Mexico and Central America, are facing in our country in much the same way Michelle Alexander’s The New Jim Crow helped me see how slavery’s legacy is being perpetuated in the mass incarceration of black Americans. As someone who has read every one of Luiselli’s books, I expected her writing here to be erudite and elegant, and it is, of course it is, but what I did not expect was for her writing to be this immediate and this personal. I did not expect to be hit this hard emotionally, to feel every fear and every longing in the deepest part of who I am. I can’t remember the last time I read something and had this kind of physical reaction. I felt this book in the tug behind my eyes, in these hands shaking, in this heart beating too quickly. This is a work I will share with everyone I know. This is something every American needs to face, and to feel.”—Kenneth Coble, King’s Books

“In an essay as bracing as it is searing, the incomparable Valeria Luiselli explores the 2014 immigration crisis. Luiselli writes with a clarity that underscores the nightmarish conditions and nonsensical bureaucracy undocumented children face on their passage to America and toward U.S. citizenship. Tell Me How It Ends evokes empathy as it educates. It is a vital contribution to the body of post-Trump work being published in early 2017.”—Katharine Solheim, Unabridged Books