The Poet's Tale: Chaucer and the year that made The Canterbury Tales 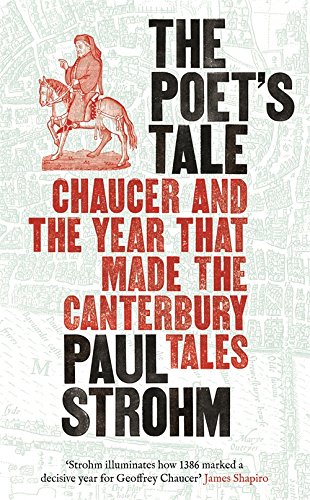 As the year 1386 began, Geoffrey Chaucer was a middle-aged bureaucrat and sometime poet, living in London and enjoying the perks that came with his close connections to its booming wool trade. When it ended, he was jobless, homeless, out of favour with his friends and living in exile.

Such a reversal might have spelled the end of his career; but instead, at the loneliest time of his life, Chaucer made the revolutionary decision to 'maken vertu of necessitee' and keep writing. The result - the Canterbury Tales - was a radically new form of poetry that would make his reputation, bring him to a national audience, and preserve his work for posterity.

In The Poet's Tale, Paul Strohm brings Chaucer's world to vivid life, from the streets and taverns of crowded medieval London to rural seclusion in Kent, and reveals this crucial year as a turning point in the fortunes of England's most important poet.

'Strohm illuminates how 1386 marked a decisive year for Geoffrey Chaucer, one in which he went from accomplished coterie poet to the popular author of the work of genius: The Canterbury Tales. Strohm, one of the finest medievalists of our time, brings this turbulent moment in Chaucer's England to life.', James Shapiro

'In this thrilling book, Paul Strohm lets us in on little-known secrets of living life in London in the fourteenth Century ... an imaginative recreation of everything you ever wanted to know about Chaucer.', Terry Jones

'Simply a brilliant book, a superb combination of biography, social history and literary scholarship. It is a new model for literary biography, and I cannot recommend it highly enough', Ian Mortimer