How A Gunman Says Goodbye: The Glasgow Trilogy Book 2 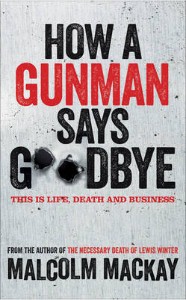 SHORTLISTED FOR THE DEANSTON SCOTTISH CRIME BOOK OF THE YEAR AWARD How does a gunman retire? Frank MacLeod was the best at what he does. Thoughtful. Efficient. Ruthless. But is he still the best? A new job. A target. But something is about to go horribly wrong. Someone is going to end up dead. Most gunmen say goodbye to the world with a bang. Frank’s still here. He’s lasted longer than he should have . .. The breathtaking, devastating sequel to lauded debut The Necessary Death of Lewis Winter, How a Gunman Says Goodbye will plunge the reader back into the Glasgow underworld, where criminal organisations war for prominence and those caught up in events are tested at every turn. The final book in the Glasgow Trilogy The Sudden Arrival of Violence will follow soon . . . Praise for The Necessary Death of Lewis Winter, longlisted for both the CWA John Creasey Dagger for Best Debut Crime Novel of the Year and the CWA Ian Fleming Steel Dagger for Best Thriller of the Year:

‘Mackay ratchets up the tension like a master’ - Daily Telegraph