A Card From Angela 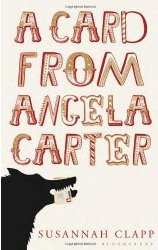 Angela Carter was one of the most vivid voices of the twentieth century: much studied, copied and adored. When she died at the age of fifty-one, she had published fifteen books of fiction and essays; outrage at her omission from the shortlists of any Booker Prize led to the foundation of the Orange Prize. February 2012 will be the twentieth anniversary of her death but no biographical work has yet appeared. Susannah Clapp and Angela Carter were friends for many years. The postcards that Carter sent to her form a paper trail through her life. The pictures she sent were sometimes domestic, sometimes flights of fantasy and surrealism. The messages were always pungent. From Stratford, Ontario, she explained that Canada was 'like Scandinavia, with liquor'. From the States, where she was smarting from a critical onslaught in the London Review of Books, where Susannah then worked, she sent a terrifying picture of Texan chili, with the message: 'Carter's reply to the critics ...goes through you like a dose of salts ...I'd liked to feed it to that drivelling wimp...' Through the medium of her postcards - small documents that are the emails of the twentieth century - Susannah Clapp will evoke Angela Carter's anarchic intelligence, her fierce politics, the richness of her language, her ribaldry, the great swoops of her imagination; she will also say something about her life. Intimate, funny, unexpected, it will catch this unique artist on the wing.