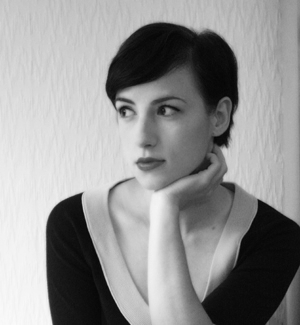 Laure Eve is a French British hybrid who grew up in Cornwall. Her first novel, Fearsome Dreamer, is a wonderfully ambitious but lusciously rich and multi-layered novel, a magnificently crafted alternate universe dripping with sensuous imagination, characters to fall in love with and an unputdownable storyline. Her debut has been longlisted for the Branford Boase Children’s Prize and Waterstone’s Childrens Prize. She has published a second novel called The Illusionists. Laure Eve’s next novel, The Graces, is a seductive, powerful and startlingly original young-adult thriller in the vein of The Virgin Suicides and The Secret History (and films such as The Craft). This is her first novel for older YA (16+) readers. It was shortlisted for the YA Book Prize 2017. Her newest book, The Curses, which continues the magic of The Graces, was published in 2018. Her next novel, Blackheart Knight, will be published in 2021 by Quercus.

In praise of Fearsome Dreamer:

‘Hugely ambitious and imaginative … a brilliant debut’ The Guardian

‘Fearsome Dreamer is truly a dream of a book. It grips and doesn’t let go. Laure Eve’s imagination is dazzling, and she is clearly here to stay. In this book is one of the most seductive and exciting fantasy worlds I’ve  encountered, helped further by a brilliant and feisty and – yes – fearsome heroine in the form of Rue. I devoured it.’ – Matt Haig

In praise of The Graces:

‘The Graces demands to be read twice: The first time for the suspense; the second for the subtleties you missed initially. Eve’s rich story is about the kind of magic that comes from spells and the kind that comes from those moments when the present feels right and the future full of possibility’ New York Times

“The magic itself remains ambiguous until the plot suddenly grows giant bat wings and flaps into full-on weirdness. The final twist might divide readers, but Eve’s writing compels.” Financial Times

“This one created a frenzy at auction and is set to take the YA world by storm… told with mesmerising style. Fabulously dark and addictive.” The Bookseller, ’10 Titles Not To Miss’

‘Mysterious, beautiful and unnerving, The Graces, like its titular family, will keep you enthralled from beginning to end.’ Samantha Shannon, NYT bestselling author of The Bone Season

“Everything about The Graces is as magnetic as the North Pole… add to this a series of twists that slowly but surely build to a stunning climax and boy, is this a treat.” SFX Magazine

“A slow burn with a fiery ending in witchy gothic romance… part The Craft, “Heathers” and The Twilight Zone… the book gets its hooks into you… The ending…. satisfies with an elegant twist.” New York Daily News

‘Told with mesmerising style, it’s charismatic, dark and wildly addictive. With echoes of The Craft and Secret History, it created a frenzy at auction and has caught fire on social media.’ The Bookseller

‘The ending will make readers want to read the entire novel again, immediately, to admire the clues they missed before. Though the facts may be slippery, the prose never is; it’s precise, vivid, and immediate. Powerful.’ Kirkus, starred review

“With an unreliable narrator, this book that could be easily described as “Twilight with witches” takes on a whole new dimension.” Teen Vogue (best new September YA)

“Fans of Twilight and The Craft will enjoy this mystifying read.” Buzzfeed (YA Fall pick)

‘A twist in the tale lifts this story beyond the clichés of The Craft; Eve’s writing is rich, welcome and brilliantly unexpected’ Metro

In praise of Knights:

"King Arthur as you’ve never seen him before. A riveting tragedy of blood and desire – and the coolest thing you’ll read this year." Samantha Shannon, New York Times and Sunday Times bestselling author

"Dizzying in scope and imagination. The boldest, smartest, most adventurous fantasy I've read in ages - and it's really f**ing fun." Krystal Sutherland, author of Our Chemical Hearts