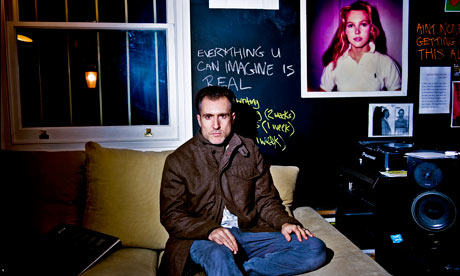 Richard Russell and the label he has run for nearly 25 years, XL, has shaped the British music scene like nobody else. From the Prodigy to Dizzee Rascal, The White Stripes to Adele, via Badly Drawn Boy, Vampire Weekend, Radiohead, Jamie XX, The XX, Gil Scott-Heron and Bobby Womack – the list of artists Richard has had through the doors of XL is extraordinary. Russell’s first book looks to be as ground-shaking as the music he has championed over the last quarter of a century. This book will not only be the most important music book of the year – the musical story of a generation – but a coruscating polemic on the music industry as a whole.

In praise of Richard Russell:

‘Taking us from the rap 80s to the rave 90s into the grimy 21st century, Richard Russell is a Firestarter in his own right and his story is a riveting adventure.’ Simon Reynolds

‘I love XL. I use them as an example of how a brand is built. On great taste.’ Jay Z

‘Russell reveals his forensic love of music and its strategies. A fascinating read.’ Damon Albarn

‘Richard Russell’s vision as a producer and guru to countless artists has always been progressive.  This memoir is required reading for anyone who cares about the recent history of British music.’ Gilles Peterson

‘If sound is the fifth element, then Richard has nurtured and enhanced some of the most important soundwaves of our time.’ M.I.A

‘Rich is the fucking boss. Man has no shoes on.’ Giggs

‘Russell has quietly become one of the most significant figures in British music. After masterminding The Prodigy’s ascent to Number One on both sides of the Atlantic in the 90s, he went on to sign and develop artists whose work has reached out beyond the charts to shape contemporary culture: from Dizzee Rascal and The White Stripes at one end of the noughties to MIA and Thom Yorke at the other, his acts have consistently set the musical agenda.’ – The Telegraph