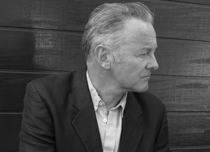 Robin Robertson was brought up on the north-east coast of Scotland and now lives in London. A Fellow of the Royal Society of Literature, he has published five collections of poetry and has received a number of honours, including the Petrarca-Preis, the E.M. Forster Award from the American Academy of Arts and Letters and all three Forward Prizes. His selected poems, Sailing the Forest, was published in 2014.

The Long Take – published by Picador, Knopf and Anansi, and forthcoming from Guanda, Hanser Verlag, Querido, and Editions L’Olivier – won the Roehampton Poetry Prize, the Goldsmiths Prize for innovative fiction and the Walter Scott Prize for historical fiction, and was the first poem to reach the shortlist of the Booker Prize.

More details can be found on his website: www.robinrobertson.co.uk