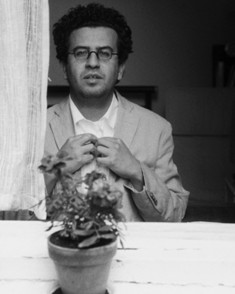 Hisham Matar was born in New York City in 1970 to Libyan parents and spent his childhood first in Tripoli and then in Cairo. His first novel, In the Country of Men, was shortlisted for the Man Booker Prize, The Guardian First Book Award, and the National Book Critics Circle Award. It won six international literary awards, including the Commonwealth Writers’ Prize Best First Book award for Europe and South Asia, the Royal Society of Literature Ondaatje Prize, and the inaugural Arab American Book Award. It has been translated into twenty-eight languages. His second novel, Anatomy of a Disappearance, was published in 2011. The Return: Fathers, Sons and the Land in Between, was published in 2016 and won the 2017 Pulitzer Prize for Biography, the 2017 Rathbone’s Folio Prize, the 2017 PEN/Jean Stein Book Award, The Slightly Foxed Best First Biography Prize and Germany’s Geschwister Scholl Prize. It was also shortlisted for the Baillie Gifford Prize for Non-Fiction, the Costa Biography Award and the National Book Critics Circle Award for Autobiography. It was one of the New York Times‘ Top 10 Books of 2016. His most recent book is A Month in Siena. He lives in London and New York and is an associate professor at Barnard College in New York City.