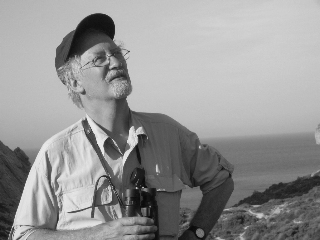 Jonathan Elphick studied zoology at Swansea University, and has subsequently worked for over 40 years as a wildlife writer, editor, consultant, lecturer and broadcaster, specialising in ornithology.

A passionate naturalist since childhood, he has travelled extensively at home and abroad to study birds and other wildlife, and promote conservation. He was elected many years ago as a Scientific Fellow of the Zoological Society of London in recognition of his services to the popularisation of zoology and in 2006 was elected a Fellow of the Linnean Society of London. Jonathan Elphick studied zoology at Swansea University, and has subsequently worked for over 40 years as a wildlife writer, editor, consultant, lecturer and broadcaster, specialising in ornithology. The many books he has written include an award-winning field guide to the birds of Britain and Ireland, The Birdwatchers’ Handbook (BBC Worldwide, 2001); with John Woodward, RSPB Pocket Birds (Dorling Kindersley, 2003 and subsequent editions); and the highly acclaimed Birds: The Art of Ornithology, a study of ornithological art through the ages (Scriptum Editions, in association with the Natural History Museum, 2004, and in a mini-edition in 2008); and Great Birds of Europe (Duncan Baird, 2008), with his text celebrating 200 special birds of the region accompanied by images from David Tipling and other world-class bird photographers.

For five years he worked closely with author Mark Cocker as researcher on Birds Britannica (published by Chatto & Windus, 2005) the best-selling book on the cultural history of the birds of these islands and our changing attitudes to them. Since 2006 he has been engaged in the same capacity on the even larger Birds and People project, which will explore the same theme worldwide. Jonathan is also currently writing a book for the Natural History Museum, and a memoir on loss, landscape and memory.