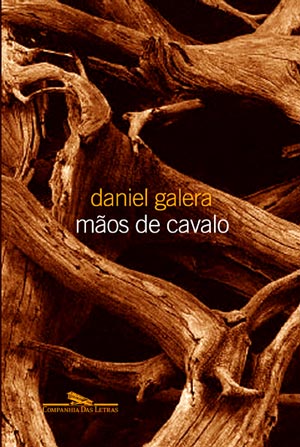 The Shape of Bones (Mãos de Cavalo) follows the life of the same man, Hermano, over three defining moments of his life: a ten year old boy takes a spectacular fall from his bicycle. The most widely feared resident of a condominium in Porto Alegre suffers a violent foul during a game of football. Two friends prepare for the radical adventure of scaling the Cerro Bonete in Bolivia. Behind these disparate occurrences, which little by little begin to interconnect in dramatic time and space, Daniel Galera constructs a delicate plot about memory, loss and guilt.The underlying key to these episodes is in the rites of passage typical of childhood and adolescence, moments of pure action that determine the personality and destiny of those who witness them. As life goes on, dormant memories surface and Hermano must deal with a past of turbulent emotions, complicated sexual experiences and death. This is a very original coming of age novel about identity.

"A talented writer, full of personality, laudable for the freshness of his writing" Carta Capital

“The Shape of Bones is a work of art about the fragility of things, the ever-presence of the past and the hidden currents that push us this way and that.  A book of visceral and tender beauty whose echoes persist long after the final page. Alison Entrekin’s impressive translation reads as if Galera had written in English.” David Mitchell, author of The Bone Clocks

“In The Shape of Bones, Daniel Galera understands that violence is mysteriously capable of restoring a person to reality and  preparing him to meet his moment of grace. His characters bear life’s inevitable weight of guilt and shame, all the while striving to resolve the fearful events of the past.” Susanna Moore, author of The Life of Objects

“The Shape of Bones is a tense, atmospheric meditation on the hypnotic pull of the past, cast in ferociously intelligent prose. Daniel Galera is a thrilling writer, and this novel is nothing short of essential.” Laura van den Berg, author of Find Me